The Pearl of Great Price: Book of Abraham 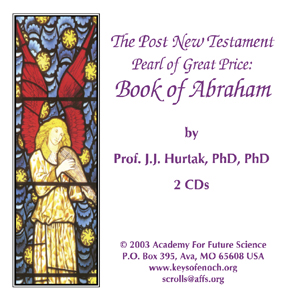 This scroll by the prophet Joseph Smith is the first of all religious scrolls to make reference to a greater Father Universe that governs the state of the heavens. In a higher body of Light, Abraham the incarnate Master from a higher realm of Wisdom was put into this dimension to explain the greater weights and measures used in the programming of this earthly dimension. The scroll reveals that Abraham was chosen by the living god Yahweh to set up on earth a priesthood of Light known as Ur and that all of his descendants and those who work with this form of light would have the seal of Ur upon them and would have the knowledge of how the foundations of the earth were set in motion. It speaks of the exodus that those of Ur will have to take out of one dimension of space-time into another as the Living God intervenes to protect the human dimension from complete destruction. Then as the earth goes into a new electromagnetic zone and the old meridians change, the Adamic race will come to understand how we relate to the central sun system at the centre of this galaxy that works through the Light energy passing from the higher heavens to the dust world creations, forever programming and re-programming the human creation.