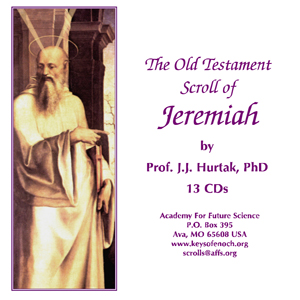 In terms of the astronomy of Kaballah, the scroll reviews the coming of Beings of Light against the Princes of Materialism, enacting a geopolitical scenario in which the false military potentates are finally consumed in the destructive cycle of their own self programming. Jeremiah shows the role of transforming suffering into positive thinking, so the energy may be put to advantage in service to humanity. It also demonstrates the paranormal powers of the mind changing the context of the reality of the modern world. Over eighty prophecies are given with special insight into the role of the dining room and the utensils which are subjected to the paraphysical power of Gods living Word.