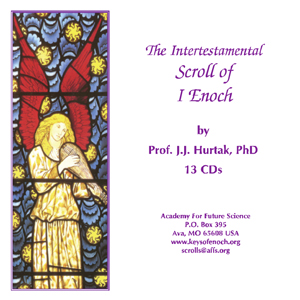 The teachings of Enoch, the one who initiates into Light, were revered by the early Christians as well as the sages of the Old Testament and the mystics of the intertestamental period. It is generally accepted that the books of Enoch were not written by Enoch but are a collection of writings inspired by him. Enoch’s eyes were opened to a much greater, multi-dimensional reality and he gave us the Language describing the Parousia or the externalization of the Hierarchy. His work was to teach the Watchers and the Wayshowers and thus he describes the events that have already unfolded and those that will unfold upon the earth plane and names those of the fallen hierarchies that have misled and corrupted humanity. Enoch showed that humanity has the ability to overcome, to experience the Merkabah and communicate once more with the true Hierarchy of Light as the Divine Names transform the body chemistry back into the Light and activate the five bodies of spiritual potential within. Once more seeing the Christed image, the Gates of Light are opened for ascension. Enoch brought back the code system of how the Holy Spirit would help humanity inscribe righteousness, peace and truth within and overcome the body of death and destruction brought by the fallen hierarchy.