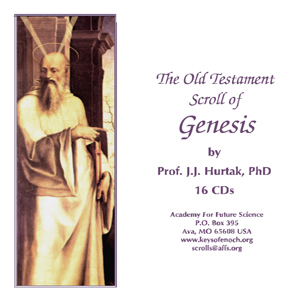 From the perspective of the collective Lordship of the Universe, this scroll unfolds the cosmology of creation of the many heavens and the earth, as well as the blueprint of Man. The fall of the Divine Image into the three dimensional realm of time and space is counteracted by the plan of redemption of the Divine seed of Light. Different levels of deliverance are depicted, from Enoch and Noah to Joseph and Jacob.

Genesis speaks of the sacred geometries issued to create this universe, the many genetic experiments coexisting within it, and the work of the Sons of Light, the Bnai Or, in conjunction with the seed of Abraham in the repairing of this universe. It speaks of the work of Melchizedek to educate and liberate the soul to inhabit realms of pure consciousness Light. The final chapter unveils the starseed program as that which delivers the child (Joseph) who can wear the spiritual garment (the coat of many colors) from the carbon based body embalmed and entombed in space-time, back into the higher heavens.